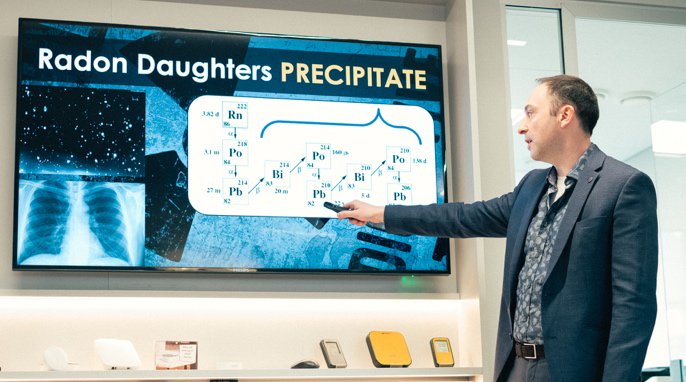 Dr. Aaron Goodarzi and team had the pleasure of visiting Airthings in Oslo, Norway last month. Here is a blog post they wrote about our visit.

When we at Airthings speak about radon, we think from a particle standpoint. We talk about alpha particles coming from the breakdown of Uranium, but in reality, there are other aspects of radon to consider and quite a few ways we are subjected to radiation. The way these alpha particles actually cause cancer is something we rarely delve into because we have particle physicists as our founders—not biologists.

That is why, when we had the chance to host Dr. Goodarzi, PhD at our headquarters here in Oslo, we were thrilled. He researches the genetic susceptibility of patients to radiation. Basically, how radon exposure causes DNA damage which then causes cancer. He points out that there are other factors that affect whether or not you actually get lung cancer. He has concluded that different people have different susceptibility of getting cancer from exposure to radon gas and radiation. Through his research, he is hoping to be able to know who these patients are. Right now, there is no way of knowing.

Radon and our biology
Dr. Goodarzi’s insights are particularly useful because he approaches radon from a biological perspective. He obtained his Ph.D. from the University of Calgary in 2005 and trained as a postdoctoral scholar at the University of Sussex before focusing on radon specifically.

We were lucky enough to have Dr. Goodarzi visit us and hear his talk about radon and DNA. Now we want to share what we learned. But what kind of radiation are we regularly subjected to? In hospitals, doctors often use targeted sources of radiation to help sick patients. When we think of the radiation we are subjected to in our lifetime, we usually think of dental X-rays, normal X-rays, and radiation therapy. However there is another form of radiation that is often forgotten or misunderstood— radon gas is found in the air all around us that is often left unmeasured, untested and unchecked. Not all radiation is the same, in fact there are two major types; alpha radiation and gamma radiation. Dr. Goodarzi made a great comparison between the two—the gamma rays from dental X-rays, are like getting a needle puncture in your DNA, whereas alpha radiation as found in radon gas, is like a cannonball shredding through your DNA. Being subjected to radon gas at home where you spend the majority of your time takes a lot longer to recover from. They are dealing with chronic radon, meaning radon that they are breathing in on a daily basis rather than just one time.

Human DNA is contained in two copies of 23 unique chromosomes and radiation exposure can cause breaks in our DNA. Dr. Goodarzi explained that not all radiation is created equally. On the radiation scale, he showed us that a dental X-ray is equivalent to a 0.01 dose. He explained, “So you increase your chances of cancer by 0.01”. This is a relatively small risk. However, he made it clear that radon was on the other end of this scale, it comes with higher risk and most importantly, there is no medical need for its exposure. Often the human body can heal itself and DNA damage is usually repaired correctly, however errors can occur. With enough radiation exposure, chromosomes, unless repaired by the body, will die. He used a great analogy to explain this—”our bodies and lungs can regenerate after exposure, however if you are still living among high levels of radon, it is like trying to fix a car whilst driving.”

He also discussed how younger people, especially children, are at a higher risk of DNA damage caused by radon exposure. In his words, “All children are radiation sensitive because they are still developing.” Children’s tissues are growing, their DNA is being replicated at a higher rate and they breathe faster meaning the amount of radon gas they breathe in is higher. As a result, he recommended, “Radon levels in a house with children should be below 100 Bq” (2.7pCi).

Dr. Goodarzi explains that “as a society, we have never been exposed to more sources of ionizing radiation than we are today”. And concludes that “radon in the home remains the single greatest exposure source”. Therefore he dedicates his time and research into urging citizens to test for radon, to ensure their safety.

Future research
Radiation in popular culture is known for creating superpowers. While it does create DNA mutations, these are not positive. Rather than being transformed into a hero from a comic book, it causes cancer. Educating on the effects of radon is key, and Dr Goodarzi’s dedicated research is making a difference.