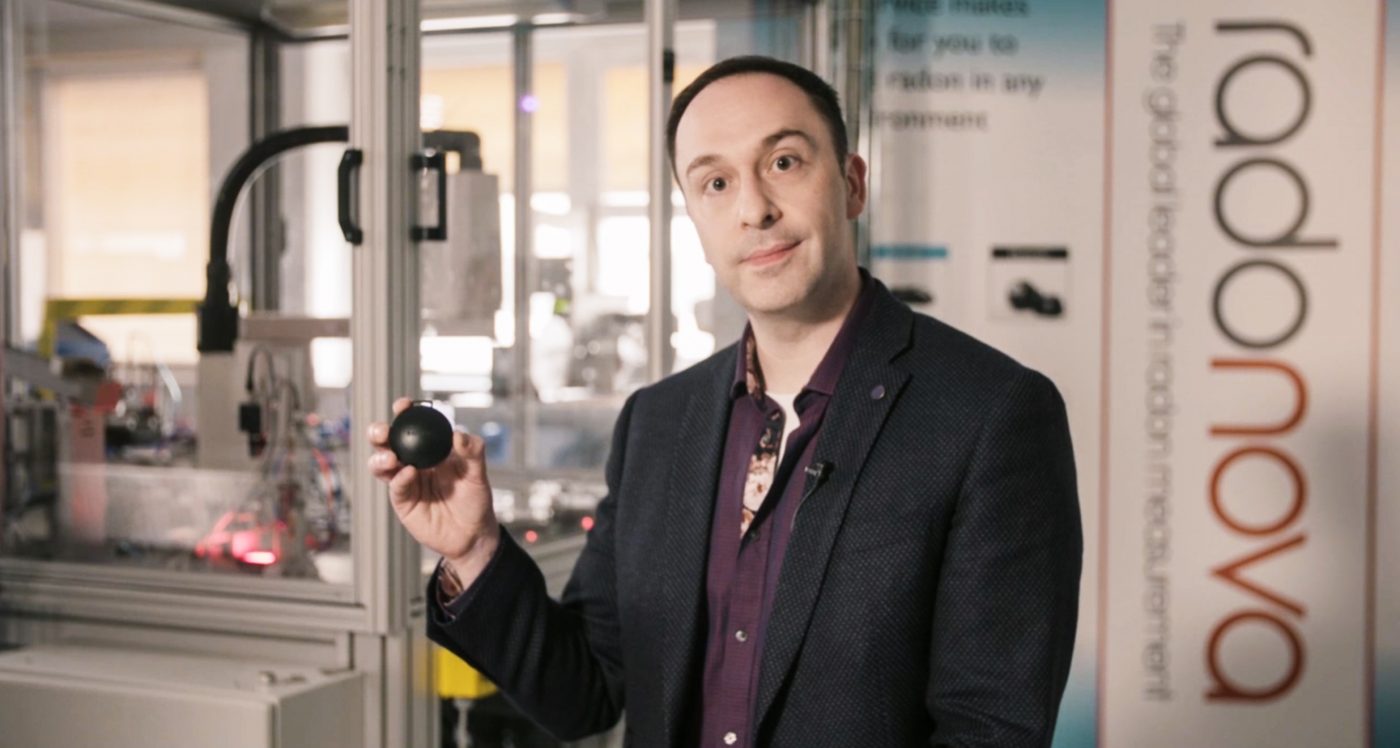 In this expert interview, Radonova sat down to talk to Dr. Aaron Goodarzi, the Canada Research Chair for Radiation Exposure Disease, about the dangers of radon exposure. Original article here.

During our conversation, Dr. Goodarzi discusses the steps that need to be taken to lessen the risk of radon exposure, the greater need for collaboration between countries and technical communities to ensure that radon exposure is tackled on a global basis and why projects like Evict Radon are essential if we are to eradicate radon as a health issue.

In brief, could you please describe what you consider to be the main challenges for fighting radon and its consequent impact on human health?

In many parts of the world, radon exposure in buildings is a worsening problem due to the evolving nature of our built environment. Lung cancer is the highest lethality cancer type known, and rates continue to rise in non-smokers for reasons that are still not clear. So, three of the most important challenges right now are (i) finding out exactly HOW our human-made environment influences our radon exposure, (ii) then WHAT we can do to reduce radon exposure and (iii) develop a clear, molecular-level understanding of WHY the radiation from radon gives rise to cancer.

(If you agree) could you please explain and elaborate on why radon exposure issue is a global issue? And how can global cooperation can help alleviate the problem?

Radon is essentially everywhere where humans have built cities on Earth, the main question is how much is entering and being concentrated within a given type of building. Different countries have different radon problems, but most can learn from one another about what works (and does not work) in terms of radon exposure awareness, testing, prevention and mitigation. Successes need to be shared to more quickly reduce radon in countries just recently coming to grips with their radon problem, whilst failures are equally important to learn from, so they are not repeated.

In many parts of the world, the knowledge about radon is low. Why do you think there’s a shortage of knowledge and awareness about radon?

Simply put, it takes time and a great deal of resources to raise radon awareness from ‘nothing’. Some countries started this process back in the 1980’s, when the connection between radon in homes and lung cancer was first realized. Naturally, those areas now enjoy a much greater level of awareness versus those that did not start the process of educating their populations until much later. As different parts of the world realize the scale of their radon problem, they slowly put resources in terms of funds and human activity into tackling the problem. Given that radon itself is literally invisible, such awareness campaigns require finesse and careful tailoring to cater the message to specific audiences and cultures. What works for one culture or demographic does not necessarily work for another, and so there is no ‘magic bullet’ for radon awareness, but rather the need for a great deal of hard work from a lot of smart and caring people.

Could you tell us a bit about the Canadian “Evict Radon” campaign? Why is it important and what are the results so far?

Evict Radon emerged from the work of enthusiastic biologists in the Canadian province of Alberta back in 2013, slowly evolving from a local radon testing campaign into a national non-profit program that uses the latest in research from across disciplines (biology, architecture, geoscience, psychology, population health and more) to defeat the radon problem. Evict Radon has revolutionized radon awareness in Canada, using a citizen science approach to encourage Canadians to test their homes for radon, while at the same time contributing their data to cancer prevention research efforts in the public domain. It has been an enormous success, with multiple peer-reviewed studies being released and underway – as well as getting 16,000 Canadians radon tested in approximately 4-5 years. Some of our key findings so far include the scale of radon exposure in the Canadian Prairies – the second highest on Earth – and the observation that newer North American homes contain substantially higher and still worsening radon levels compared to older homes. We are also in the process of discovering the ‘formula’ for a high versus low radon property, which will be very important to ensure that new homes no longer contain high radon.

Radonova has been measuring and analyzing radon for a long time and they are involved in the Evict Radon campaign. What is your impression of its radon detectors and expertise?

We carefully surveyed different testing options at the outset of our study, and ultimately decided to go with Radonova for three reasons. First, their devices are the only ISO certified devices available – meaning the validity of the radon data obtained from such devices is recognized internationally as they are rigorously tested on a regular basis by independent third parties. Second, they offered the highest possible data security and online infrastructure we could find. Finally, their quality control process met our exacting standards in terms of accuracy, precision and scientific rigor.

How much can we achieve when it comes to fighting radon?

I firmly believe that we will get to a state where radon, as a source of lung cancer, is a rarity or even a memory. This will take time, but it has been done for other toxic compounds and pollutants. Given that radon can be so easily tested for and, if high, removed from a property, there is no reason why it should continue to take the lives of thousands upon thousands of people each year.

Dr. Goodarzi is the founder and leader of Evict Radon, a new Canadian non-profit organization whose goal is to solve Canada’s substantial and worsening radon-gas exposure problem through interdisciplinary research for the benefit of all Canadians.

“Radon in our Homes: The Science Behind the Danger”, Dr. Aaron Goodarzi, TEDx Talk: https://radonova.com/ted-talk/

Share article
Why radon should be an important conversation this Thanksgiving Previous Article
Take radon testing seriously this November for Lung Cancer Awareness Month. Next Article
Back to List